Not gonna lie, when I first met Tajo I thought he was kinda weird (but in like an artsy/cool/even kinda intimidating kind of way). But as I got to know him a little better those initial impressions turned into ‘wow-he-is-so-fucking-cool’ feelings. I would constantly ask him if I could take a peek in his sketchbook or look at his art blog. My admiration for his artistic abilities took all precedence over any preconceptions. He’s one of those people that you are equally jealous and in awe of. Whether he becomes a tax advisor (he won’t) or a world renowned artist (he will), I know he’ll still be rad as hell in whatever he’s doing. I decided I had to interview him for Auric because not doing so would be a disservice to the world. So here I present to you one of the coolest guys I know who also happens to be insanely gifted, Tajo McBurnie:

Whats your favorite medium?
I do a lot of printmaking, but I also draw a lot, I don’t like having favorites. Printmaking is cool though.

What piece are you most proud of?
I like a lot of the portraits I’ve done lately, but after some time passes by and I look at art that I’ve done a while ago I start to hate it, I guess thats part of the reason I keep making stuff.

What inspires you?
Thats a pretty big question. I’m inspired by others artists, which most people are I suppose. I was really into impressionism recently, cause I read this biography about Van Gogh, they have this Degas at the Santa Barbara Museum of Art that I would sit in front of and try to draw it over and over. Before that I was in constant awe of Egon Schiele and Gustav Klimt. Again though, thats a huge question, Im inspired by books, speech patterns, flowers, and most things, like yesterday I was sitting on a bench and some guy approached someone sitting near me and loudly inquired if someone had a gun for him to kill himself. Stuff like that.

Do you have an interesting story of how you came up with a particular piece?
I take a lot of stuff I find on the ground. I found this note that said “Crab Cakes”, written in red pencil, they drew a spade next to it too. Thats actually not very interesting. I had this matchbook my girlfriend’s mother gave to me at an airport, it has a giraffe on it. I had to wait at that airport for 10 hours by myself, accompanied by a sketchbook, a found pack of cigarettes (3/4ths full), and a couple of workers to sit with me on their break, that situation produced some interesting art, but that was just context. I dont have a good answer for this question.

How would you describe your style/ how did it become what it is?
Thats another hard question. Having a “style” is kinda scary cause you, at least personally, get into the mindset that you have to create within the bounds of your “style”. But I dont know, right now I’ve just been doing a lot of printmaking and collage.

Where do you picture yourself 5 years from now?
Five years ago I was twelve, and I had no idea what was going on, five years from now I hope to be able to say that about my current self.

Who is your role model (art-related or not) and why?
I want to be like Harmony Korine, Jean Michel Basquiat, Lou Reed, Rasputin, and George Antheil who’s avant-garde compositions were so shocking to people at the time (the 1930’s), that to maintain his audience he would lock all the doors and keep a loaded pistol on his piano. I want to be like all of those people combined, so I suppose they’re my role models

What are your favorite and least favorite parts of making art?
One thing I really like about creating an image, or just something visual, is putting it out to be viewed through some public conduit. Whether that be pasting it up on city property, having it in a gallery, or putting it online, it just sort of affirms the whole process that went into it, whatever the opinion of the viewer, theres some satisfaction of forcing your perceptions on people through something visual. The worst part is not being able to create something, that just seems to fuck up every aspect of whatever else is going on.

What advice to you have for aspiring artists?
I guess I’m barely an aspiring artist myself, but to my comrades, I’d suggest you completely invest yourself in your creations, acknowledge all the progress you are constantly making, talk about what you create, create constantly as in at all times, and don’t let yourself be stopped. I suppose I can’t really escape sounding cliche, but theres my answer.

What is your dream for your artwork?
To be satisfied and assured, but not completely, just enough to maintain some small sense of validity, but doubtful enough to want to keep creating.

What things in this world do you love most?
A few people, namely this girl Emma, skateboarding & scabs, art museums, coffee, places where things are tall/close together/dark, and some other stuff too probably.

What are your plans for the next year?
Since I don’t have to go to high school anymore, I’m gonna work for a while and go to art school soon hopefully (I use the abstract “art school” cause I’m indecisive, I’ll probably go to the School of Visual Arts or the School of the Art Institute of Chicago, but who knows). I’m also trying to become more of what I think an artist is, showing in galleries and selling my art and what have you. This shits for sale, tell your friends. Damnit this is starting to sound pretentious.

Tajo also writes!! Take a look at a piece he wrote for Auric, here. 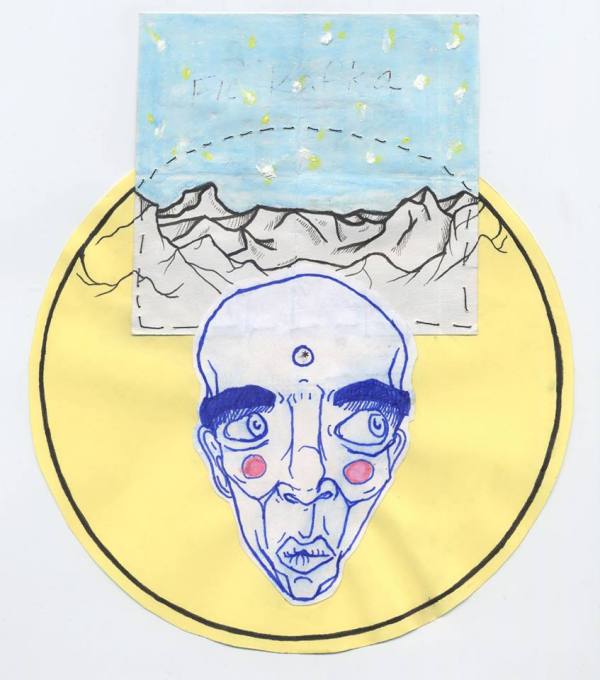