When you hear this introduction at the Grammy’s in a few years, you can give me quote cred. But when you go see them live at whatever local venue where they’ll be making an appearance in the next few months, you can go insanely wild.

Two years ago Jesse and Parker started jamming in the garage, writing some songs, serenading each other with their guitars. Now they’ve adopted a few boys, put a name to their gang, and BAM. Fame. (Almost).

This band is now called Goldy, starring Jesse Brinkenhoff, Parker Oswald, Josh Kass, and Saul Nadis. They’ve raked up some groupies over the years (including myself) and continue to hypnotize the minds of every pair of ears that crosses their path. They perform mostly original songs, gifting the audience with all of their heartbreaking yet melodic emotions. The sincerity behind their lyrics and the passion they put behind their performances will leave you with chills down your spine. I’m not exaggerating. I just want to take in deep breaths of the emotion gushing from their instruments, their voices, their presence. Yeah, okay that sounds really creepy. But their music makes your fingertips curl with zeal and your heart beat faster than normal. Just believe me when I tell you: they’re good.

I got the chance to interview the band members themselves after their most recent show at Velvet Jones before they were whisked away by ladies and body guards escorting them to their after party. **blessed**

Auric Magazine: How did you decide upon the name “Goldy” for your band?
Goldy: Jesse’s dog died on his birthday when he was little…his name was Goldy.

AM: What other bands would you relate your sound to?
Goldy: We like to think we’re like a Girls coverband.

AM: What are your plans for the future as a band?
Goldy: A couple of us are moving to San Fran next year to pursue our music. We’ll go to school there and will hopefully have good, consistent gigs with appreciative crowds. “We hope to get to the top” – Parker

AM: What are the majority of your songs written about?
Goldy: Girls, heartbreak, drugs.

AM: Saul has only been in Goldy for a couple months; how is he doing in the band?
Goldy: Saul is awesome…he’s so much better than all of us. We’re amateurs compared to Saul.

AM: What’s the coolest thing you’ve ever done on stage?
Goldy:
Saul- I threw up on stage during Music of the Night a few years ago…
Jesse- Someone handed me a pill before a concert once and I took it and felt weird. And I crowd surfed once.
Josh- I’m not allowed to do cool things on stage…(laughs). Well Jesse took off his sweater at Velvet Jones and was wearing my old Led Zepplin t-shirt, that was really cool.

AM: How would you say you interact together on stage?
Goldy: Josh and Saul really hold it together, well, mostly Josh. Jesse and Parker sort of stop focusing on their instruments after a while…

AM: Do you ever get stage fright?
Goldy: We all do pretty badly. We have a tradition where we drink wine before each show to relax.
Josh- I get really gnarly stage fright, but drumming takes more coordination than playing guitar; I don’t want to mess up so I don’t drink beforehand.

AM: When are you going to become famous?
Goldy: Aren’t we already famous?
We’ll release an EP (small record) soon, book a tour of house shows across the coast of the California. Then we’ll be famous. We’re in the process of recording right now. Coming soon! 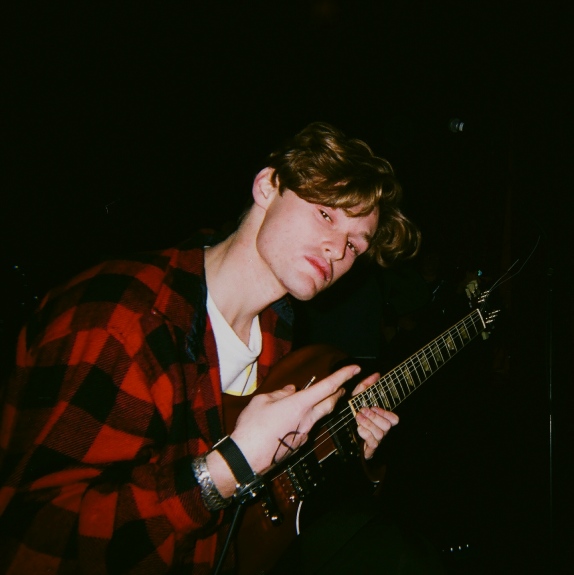