Oh my god and now look what they’ve done.

They’ve knocked over a bottle of wine. RED wine. On carpeting. Oh my god CARPETING, baby.

“Shit,” he says, as he holds the bottle. “Oh no,” the girl says, as the carpet sucks up the red stain. I watch as they mop up the mess with wet paper towels. A Jimi Hendrix song is playing on an iPhone. When the stain is less noticeable, the two return to their seats. The boy is large and much heavier than the girl. I can feel the girl’s smooth legs, she has obviously shaved for this occasion. The two laugh.

“Well, there goes half a bottle of cheap red wine.”

“At least the stain isn’t that bad.”

Yeah, and thank god they didn’t spill it on me –– that would have been a shit show. Leopard print doesn’t groove with red wine because baby I’m already covered in cat hair and dust.

But hey, look at what a crotchety alte kaker I’ve become. Back in the day I would have enjoyed their company. Baby, the 70s were my prime; back when I was young and naive and didn’t care about dust or cat hair or stains.

I remember it was 1967 and a Jimi Hendrix song was playing on the radio and some kids were sitting on me, smoking pot. Hendrix would be performing at Earl Warren Showgrounds that night. And oh my god those kids were hellbent on getting stoned out of their minds before going. Suddenly one of the guys said, “This couch is far out, man!” Everyone laughed.

He felt my funky upholstery.

He admired my stylish cushioning.

“It’s like leopard and shit, man!” The girls in the room giggled. “I think it’s cool,” one of them said. “Yeah, okay, faggots” said another guy. “Let’s go.” The group left for the concert.

Fast forward to 2015. It’s midnight and the rest of the neighborhood is asleep and baby I’m wondering why the girl and the boy are still here. The tiny room is full of smoke. It smells like, I don’t know, burnt strawberries. The two teens have turned it into a hookah emporium. The iPhone is still playing the Hendrix song.

The girl says,“Wow I just love Jimi Hendrix. He’s just so, like, soulful, you know?” 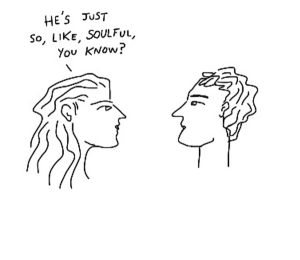 The guy says, “Yeah he’s probs one of my favorite artists.” Then they start making out. As a couch, having people make out on me isn’t anything new. Hell, back in the day those peace-loving potheads would always end up kicking off their Jesus sandals and engage long make-out sessions, and it didn’t bother me.

But baby, this is different. These millennial kids, oh my god, they disgust me. Bad vibes. They don’t have the same . . . je-ne-sais quoi as my beloved Generation X.

Take for example, Figure A, this wad of testosterone. He definitely knows absolutely nothing about his so-called “probs favorite artist.” Hell, he just wants to get Figure B naked.

Figure B. The girl. Ugh my god. She’s almost worse. I think to myself –– Wow, I bet you just luuvvv Led Zeppelin too. Since that’s the only other rock band you’ve heard of. They’re just so, like, hardcore, you know? Get yourselves off my fine leopard print.

Take your wine and your hookah shit and go be pretentious somewhere else.

Leave me here in my room of nostalgia.

Get up off of me.

ME, the groovy leopard print couch.