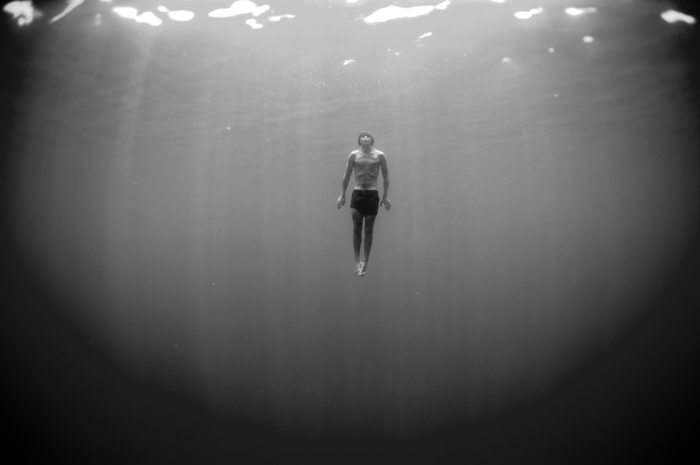 His mind was not well. It had seen better days, far better days. Pictures of her, yellowed and torn, fluttered too quickly, an old-fashioned movie reel, casting soft, frantic shadows in the bare corners of his sickly, sickly mind. He watched and rewatched her laugh with that goddamn huge mouth, how did she have so many teeth? And she would compose herself again, hardening her gaze, darkening her gaze. It fluttered too, her gaze, from him to the sheets, and now there it was following the crack that crawled across the ceiling. He wished she would just pay attention to him. Just him. Her wandering gaze… he supposed that’s why these pictures were torn now, why they were yellow, and not black and white. Nothing between them was ever black and white. No yes or no. Sometimes and maybe, never never and always. How could he have fallen so deeply, so delusionally for someone like her? He liked things to be precise. Decise? Decisive. Decisive. He was losing it, he had to get back, he was drowning. Which, he did concede, was his preferred method of answering the final summons, biting the big one, you know, dying. Maybe he would go to hell, like she said he should, but if not for the free harp and the good eating, he wanted to go to heaven to be with her. Who was he kidding; no yes or no, never never and always, remember? No heaven or hell. Just limbo. Where he would be stuck forever, regarding her.

Shout out Lu and Liv for providing the beats that fueled this shit. <3HANA

One thought on “A Train of Thought”